Mr Thompson loved spending time with his grandchildren James and Ellie. He was a single grandfather but always made sure that he made time for the children and saw them regularly. He was a normal grandfather who spoilt the 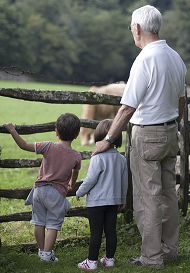 children and then happily handed them back to their mother at the end of the day. All that changed in May 2012 when he received a phone call from a Social Worker letting him know that they were going to remove the children from their mother’s care.

Mr Thompson commented: “I was apprehensive about giving up a full time job but the Social Worker reassured me that the Council would support me and I would not be out of pocket. This could not be further from the truth. Once my benefits for the children had come through, I was more or less left to it with no support from the Council”.

It was only when Mr Thompson came across Grandparents Plus that he was informed that the Local Authority could be assisting him financially with the cost of his grandchildren. Grandparents Plus advised him to seek advice from Ridley & Hall who are specialists in the area of kinship care.

“When I met Mr Thompson it was clear to see that he was really struggling financially with the increasing costs of caring for his two grandchildren. He had given up a full time job to care for them so he had experienced a drop in income with two extra mouths to feed. I wrote to the Council and asked them to undertake an assessment of Mr Thompson for financial support. I also asked them to make a backdated payment to him to cover the period since they were placed with him”, Mrs Moody remarked.

The Local Authority agreed to assess Mr Thompson and finally, almost 6 months later, agreed that he should have been receiving the equivalent of the national minimum fostering allowance for the children. He will now receive just over £1,100 per month for the children and will receive a lump sum payment of £58,000 in back dated allowances.

Mr Thompson was over the moon. He commented: “I’m glad I was sat down when you told me the figure! I am so grateful to Helen Moody at Ridley & Hall for her advice and the work she has done for me. I cannot believe that I should have been receiving financial support for the children and that Blackpool never advised that I might be entitled to it. It makes you wonder how many other authorities out there are not giving family carers all the information. I am delighted that I can now use the money to treat the children. They have missed out on so much and finally, thanks to Helen, I will be able to give them what they deserve. I feel like a millionaire!”

Mrs Moody observed: “Mr Thompson is not the only family carer in this position. Up and down the country there are many authorities who do not provide kinship carers with all the information on what they are entitled to. It is important that everyone who considers they are in a similar position to contact Ridley & Hall and seek expert legal advice”.

If you require legal advice or help in community care and adoption, please contact Helen Moody on 01484 538421.